He is a very, very large man.  He is not warm and fuzzy but instead outspoken and assertive.  He is disabled with the loss of one leg following a horrible accident almost ten years ago.


He was found in his home, during Hurricane Sandy in water neck high when his electronic wheelchair stopped working.  He yelled for his girlfriend to get to higher ground with their dog.  He waited there until he was rescued.  His rescuers brought him to a local hospital.  His girlfriend is still in a shelter with no place to go waiting for some help and direction.  Their beloved dog has been left to be cared for by others.
He met me, on this visit, in the lobby of the hospital in a new loaned electric wheelchair that he used to scoot around the hospital lobby.  While sitting and talking with him, he shared that his “good leg” was in a lot of pain but he wasn’t getting his pain medication.  When I looked down, I waited for him to remove his sock but soon realized it wasn’t a sock at all but his leg was turning dark purple or even black.
“What have they done for this” I asked him.  “Nothing” he told me.  He said he told someone about it two days ago but still no one has done anything about it.  I brought him in his wheelchair to the nurse’s station and asked for someone in charge.  The nurse told me she was in charge and would call the doctor to meet us in his room.
I asked the man who came in if he was the attending.  He told me he was a resident.  “What year” I asked.  “First year” he said.
I asked him to look at the patient’s leg and let him know what will be done about it. As the first year resident put his hand out to touch the elevated leg, I stopped him and said “please wash your hands before touching him”.  He complied and then took gloves and looked at the leg.  He said he didn’t know what the problem was.  I insisted he find out.  “Is there anyone who would know?  A vascular doctor, the attending, someone has to know before I leave what the plan is to treat this?”   The young man avoided eye contact with me but kept looking at the leg.  When the silence went on too long I asked him, “If this was your father, brother or child, would this be ok?”  I kept reminding him we need a plan of care but the resident tried to talk about the patients discharge and going to rehab.  He said this is where they would be able to treat this better.
I would not let him change the subject and told the resident that we are not discussing rehab right now, there is a problem right now that needs addressing and I can’t leave until I and the patient know the plan.
The resident said he would find someone with an answer and left.
He returned a few minutes later and explained that his leg needs to be elevated. “Now that’s a plan” I said.  I asked the patient if he understands that and asked what he will do?  “I can’t keep it up 24/7” he said.  The conversation was now between the doctor and patient.  The dark color was already fading.
Posted by Ilene at 7:22 AM No comments:

Diagnostic Errors in Medicine; We’re talking about it now!

We now have something else to talk to patients about when it comes to medical errors.  Diagnostic errors.
I had the privilege this week to speak at Diagnostic Errors in Medicine (DEM) Conference at Johns Hopkins University, Baltimore.  There was a new group launched called Society to Improve Diagnosis in Medicine.  Their mission; We envision a world where diagnosis is accurate, timely, and efficient.
I took this from their website; “Diagnostic error, defined as wrong, missed or delayed medical diagnosis, occurs in 10-15% of cases, leading to immeasurable harm and billions in inappropriate medical costs. These errors are also the largest contributor to total medical malpractice payments”
So what can we learn from this?  The conference leaders brought in many different speakers who have experienced diagnostic errors as well as medical professionals willing to talk about them.  We learned from the patient’s perspective that the doctor isn’t always right.  For hundreds of years we have been asking the doctor what’s wrong and we expect the answer and the treatment to make us well again.  We are now learning (I have known this but now the docs have let the information out) that we should probably be asking the doctors his / her advise and then we make a sound judgment , after gathering all the facts on what needs to be done.
I spoke about communication and how body language plays a big role in our sharing, or not sharing of information.  If we don’t feel comfortable sharing, we may forget to tell the doctor something to help with the diagnosis.  Do we understand the explanation about our treatment?  Maybe not.  It is not low literacy as someone insisted to me. It is poor communication, usually on the clinician’s part.
One researcher insisted that she can tell who patients are with low literacy because of how they struggle to put sentences together.  I suggested that many people with low literacy have a very sophisticated vocabulary and have used that as a tool to cover their lack of reading skills.
Many people have heard about a misdiagnosis.  It can be a stomach ache that was actually an enlarged appendix that burst, or a deadly ectopic pregnancy where the doctor tells the patient to take an antacid.  A patient who has a misdiagnosis that a painful infection is a rash or being told that there is (or isn’t) cancer when the tests, which went unread, or were misplaced were the basis for lack of communication. 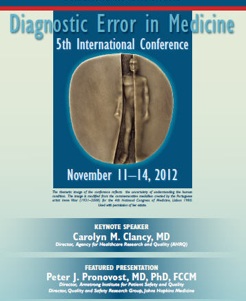 Rory Staunton’s dad was there talking about his son’s misdiagnosis of an infection.  Rory was in deep pain following a scratch at gym during school.  At  a New York hospital they didn’t wait for the lab results to come back showing he was compromised and soon after Rory died from an undiagnosed infection that got into his blood stream.
It’s easy after the fact to say what the family should have done but we, the patient don’t always know that doctors make mistakes.  It’s up to each one of us to now know that.
The following morning after Mr. Straunton spoke about his son, he sat with me at breakfast and told me some of his real feelings that he has as a dad.  He used the words that I remembered using so well when my own son died years ago.  It wasn’t only that his son died that is so painful but Rory died because his parents trusted the doctors to care for their child.  That trust makes it much more painful.  Ciaran Staunton shared stories about how wonderful his son was.  How smart he was and caring he was about others.  Rory, like many advocates can change the world.  Sadly, he just won’t be here to see it.
Posted by Ilene at 5:41 PM 1 comment: